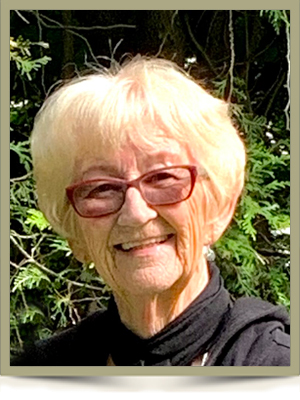 Betty passed away peacefully surrounded by her family on Friday, September 23rd and has been reunited with her husband Michael and her daughter Anne.  Betty will be dearly missed by her daughters Mary, Donna and Carol, her sons-in-law Tim, Dan, Jim and Doug, her grandchildren Leigh, Jacqueline, Ryan, Adam, Thomas, Rebecca, Emily, Sarah, Nathan and Sophie, and her great grandchildren Haileigh, Jocelynn, Danika, Amaya, Avaya and Qavvik.

Betty lived and loved in full colour. Born in Richmond Hill to Stanley and Leila Moore, she entered life at the end of the Second World War. As an only child she vowed to have a large family and she succeeded wonderfully at this and so many other aspects of her life. After training to be a nurse she fell in love with a handsome young sailor named Michael. Although she had previously known him as the annoying son of their close family friends Jim and Irene (and future in-laws), Betty couldn’t resist a man in uniform. They married and started their family in Willowdale, later moving to Weston and finally settling in Caledon East where they raised their four girls. After Mike passed away she moved from their beautiful home in Owen Sound to Angus and then to Alliston.

Betty’s love of travel began at an early age with her father’s return to England when she was just ten years old. She travelled extensively with Mike and her daughters and continued to travel on her ‘girls getaways’ with close friends. Her love of exploring new and exciting places led her to Europe, Asia, Africa and the Amazon. And there were always new friends and a great story that accompanied each journey.

Betty taught her family the importance of friendship and humour. She was always the life of the party, making friends wherever she went. Having amazing people around her throughout the years was a huge part of her life and her support system, in good times and in bad.

Betty enjoyed painting, golfing, playing piano, boating and her time at the cottage. Each of which were best enjoyed with family, friends, a glass of wine and a lot of laughter. She will be truly missed by all who had the pleasure to know and love her.

A memorial service will be held on Monday, September 26th at the Gibson Centre, 63 Tupper Street West, Alliston from 1 to 3 p.m.

In lieu of flowers, the family requests donations to Matthews House Hospice or your favourite charity.