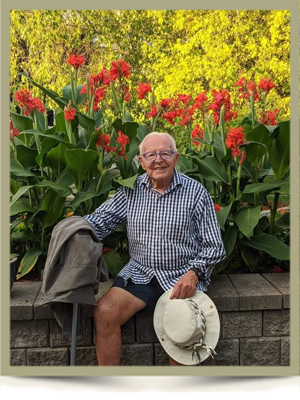 Arie Kavelaar always saw the light of music, which he loved to share.  Arie was born in The Hague, Netherlands and during WWII he shared his music by playing in the Salvation Army Band.  Following the War, he met his wife Majo (predeceased) and they went to New Zealand (NZ) via the Band.  Arie played guitar and Majo played the mandolin.

They settled in NZ and introduced Arie Jr., Dirk and Helena to the world before travelling to South Africa, Holland and finally landed in Canada.  They found their home in Caledon East and Arie has always said, “Canada is the best country”.  He believed this because of the space and the ability to raise your family in freedom.

Arie was 18 years old during WWII and has shared many stories.   He was a mechanical engineer being a ‘precision maker’ by trade and his first job when immigrating to Canada was at De Havilland as a Tool and Die Maker.

He always supported his 3 children and 4 grandchildren, Arie Jr. (Maribeth); Dirk (Debby); Helena (James); Devon (Phil); Heather (Andrew); Brody (Marissa); Braeden (Megan)….in all of their aspirations.  This included all sports of interest and there was no holding back!  He invented and manufactured the 1st fastball pitching machine for the 1980 Chinguacousy Midget Provincial Fastball team and his involvement led the team to win the Canadian Championships. Bravo!

Arie lived his retirement years in Wasaga Beach and Florida where he met his wife Diane.    They led an active life with tennis, aqua fit, dances, and they loved going to the beach.

Arie had a fine tune, like a Mozart waltz.  Some of Arie’s musical talents were playing the Trumpet, Trombone, Sitar, Guitar, the French Horn and singing in choirs.  He also conducted many concert bands.  His smile, confidence, and honesty inspired us all.  Thank you for being you!!   You will be missed.  Love your family.

Offer Condolence for the family of Arie Kavelaar