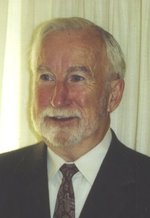 Lorne, in his 75th year, died peacefully early Tuesday morning, April 28, 2009, just ten short days after his wife Jackie.  Beloved father of Kathy Eden, and Kelley and Geoff Potter as well as proud and adoring grandfather of Tasha and Jordyn Potter, predeceased by his wife of 47 years, Jackie.   Dear brother of Lloyd and Audrey King, Bernice  King,  Gordie and Gail King.  Lorne was known in this community for his years working at Egan’s Furniture Store as well as his involvement with the BIA and the bypass committee.  Well known for his sense of humour and mischievousness, he will be sadly missed by his family and friends.  Many thanks to the caregivers and residents of King Nursing Home who became an extension of Lorne’s family and to the many friends and family who visited him after that became his home.  The twinkle in his eye was there until the very end!  The family will receive their friends at the Egan Funeral Home, (Hwy. 50), Bolton (905-857-2213) Friday afternoon 2- 4 and evening 7-9 o’clock.  Funeral service will be held in the chapel on Saturday morning, May 2 at 11 o’clock.  Followed by cremation.  If desired, to honour Lorne’s life and the care he received, donations may be made to King Nursing Home, .  Condolences for the family may be offered at www.eganfuneralhome.com

Offer Condolence for the family of Lorne McIndoe King