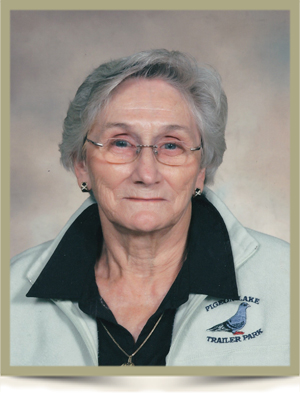 Wife and best friend of 61 years to Tom (deceased). Cherished and loving mother to Jacqueline (Robert), Valerie (Andrew) and Geoffrey (Lynn).   Best Grandma ever to Corinne (Tim), Ed (Grace), Hannah, Samuel, Claire and Jenna. Great Grandma to her “little boys” Darcy and Thomas Jay (TJ).   Beloved sister to Pat (Marjorie and Michael), dear sister-in-law to Virginia. Remembered with love by her family in England.  Mum met her great love and steadfast partner in life Tommy, through their mutual love of cycling. They were members of the Northwood Wheelers, and enjoyed many adventures across the beautiful English countryside. In 1954 they began the next chapter of their lives, marrying and moving to Canada. They would eventually settle in Bolton in 1958 to the place they would call home.   Mum put her heart into everything she did. She was extremely accomplished at anything she put her hand to. She was fiercely devoted to her children and grandchildren. She was the glue at the heart of the family. She raised her children by example, honesty, integrity, hard work and family above all else. Her grandchildren brought out her softer side and were a source of such joy and happiness.    Mum believed in being part of a community.  She gave freely of her time to help Dad with the Bolton Ambulance.  She volunteered with The Bolton Figure Skating Club (even though she never learned to skate) and Christ Church.  She held her friends in very high regard.   Many thanks to the care Mum received from her stay at King Nursing Home in Bolton. She called Riverside Glen her home for the last four years. Dr. Friars, thank you for your exemplary care of Mum. To the staff, your kindness, your compassion, and your genuine affection to Mum will be treasured by us forever. Becki, always patient with our questions and concerns, this week especially, thank you for going above and beyond.

Dad, you’ve got your girl back.

Keep her safe until we meet again.

In lieu of flowers, donations to the Alzheimer Society of Ontario would be greatly appreciated.

Condolences for the family may be offered at www.EganFuneralHome.com.

Offer Condolence for the family of Sheila Simpson (nee Johns)