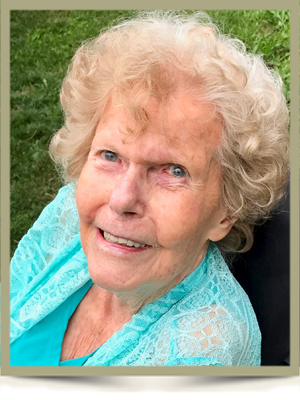 Mary Stuart Lorriman passed away peacefully at the Royal Victoria Hospital in Barrie on the evening of May 5, 2019. Her family were at her side during the afternoon. She was the fourth and youngest daughter of Stuart and Helen Playfair.

She met her husband Garf in Halifax while serving in the Women’s Royal Canadian Naval Service (Wrens) during World War II.  Garf was an officer in the Royal Canadian Navy.  The two married in 1946 and celebrated their 67th anniversary in September of 2013.  Garf passed away on April 30th, 2014

Mary spent her married life being the full-time mother of six boys. She was involved in their schools and supported their interests.  She also actively supported a number of charities.

Mary and Garf enjoyed living on their farm near Orangeville and spending summers at Pointe Au Baril on Georgian Bay. They liked to travel and put many miles under their belts on land and at sea.  Both were active sailors and skiers. She loved being outdoors and the feel of wind blowing on her face.

In keeping with her wishes a private family farewell has been held.  If desired, memorial donations to the Royal Victoria Regional Health Centre may be made through the RVH Foundation, 201 Georgian Drive, Barrie  L4M 6M2 (www.rvh.on.ca).