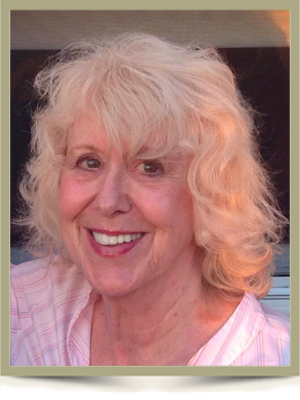 KLEINBURG, ONTARIO, CANADA – June Glenna BARKER (nee Santoni), passed away peacefully on Saturday, June 6, 2020, at home with Heidi, Brian and Darren by her side.

June was born in the “Aluminum Capital of the World” Arvida, QC, to Fred and Phyllis Santoni.  Their bustling family home with siblings, Terry, Ronnie, Brian and Carole was full of music, laughter and ‘joie de vivre’.

She met the love of her life, Vern Barker, when he was stationed at the nearby airbase in Bagotville.  The handsome young navigator was from small-town Alberta.  They were smitten with each other and Vern would drive to Arvida every night after flying to visit June, until they married on October 15, 1960.

June embraced the life of an officer’s wife moving from base to base and making great friends along the way.  Their first ten years of marriage celebrated the birth of their children and included many moves across Canada from Quebec to Comox, BC with a short stay in Moose Jaw, SK where Vern trained to be a fighter pilot.  In 1978, a five-year European adventure started in Rome, Italy then moved on to Ramstein and Heidelberg, Germany.  June soaked up the culture and lifestyle.  She loved visiting new places, meeting new people and learning new languages.  Already fluent in French from childhood, she went on to converse in Italian and German.

The family returned to Canada in 1983 when Vern became the Commanding Officer of CFS Alsask, SK. Soon after June was faced with the tragedy of Vern’s sudden death from undiagnosed cancer. She moved to Edmonton to rebuild her life close to her sister and two sons, slowly adjusting to life without the love of her life.  She started working as a bilingual VIP tour guide at the Alberta Legislature.  Her friendly outgoing nature meant she thrived in this role for twenty-five years until she left Edmonton.

June had a love of dogs from childhood that remained with her till her final days, notably, her German shepherds Tony, Caesar, Steiner and Chief.  She had many passions and talents including singing, music and decorating. Her home was her palace, always impeccably organised just in case the Queen dropped by.  She had the natural ability to create a beautiful and inviting home and had the healthiest houseplants ever seen.  She dressed with flair, often sporting her trademark pastels and matching scarves.

June was extremely proud of her three children and passed on many of her qualities and interests to them. After years of contemplation, in 2014, she left Edmonton to live down the road from her son Brian in Kleinburg, ON, and midway point between Heidi and Darren, who were living in Vancouver and London, UK.  From here, Juni-Moon was able to spend more time with grandchildren.  Her warm and bubbly personality meant she made friends easily and maintained those friendships over shared cups of coffee and hours on the phone.

Diagnosed with cancer for a fourth time in October 2019, June’s undeniable spirit and healthy lifestyle allowed her to defy medical predictions around her life expectancy.  June’s soul departed on a sunny summer’s afternoon at home with John Denver’s “Country Roads” playing softly in the background and her children by her side.

She was preceded in death by her loving husband Vern, brother Brian and sisters-in-law Phyllis, Evelyn and Margo.

The burial will be held at Laurel Hill Cemetery, Bolton, Ontario. The Anglican Reverend Mark Stacey of Christ Church, Woodbridge, will lead the service.  A celebration of June’s remarkable life will be held at a later date.  June loved people, parties and pooches.  Please have a rye and seven in her memory.

In lieu of flowers, donations may be made to the Canadian Cancer Society or the Scholarship Program of Canada Company, a charity that supports military members and their families.  Its Scholarship Program’s aim is to recognize the sacrifice of Canada’s military members made in service to our country, and to honour their legacy through the children they have left behind.

Offer Condolence for the family of June Barker

Offer Condolence for the family of June Barker