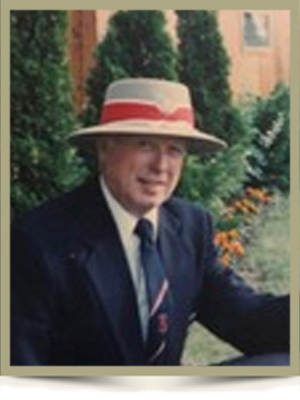 The Ingoldsbys were one of the founding families of Peel Region.   They were pioneers who settled on a 100-acre farm at the corner of Heart Lake Road and Countryside Drive in 1828.  John was a fifth generation farmer.   After retiring from farming, he pursued many passions including travelling, hunting, curling and long-range sharp shooting.  Over the years he was a member of the Canadian and Ontario Rifle Teams.  He competed all over the world including England, Kenya, Australia and South Africa.   In celebration of their success, he and his teammates attended the Queen’s Garden Party at Buckingham Palace in 1995.   Most of all, he loved being on the farm, with his wife Vi, tinkering with machinery in the barn or downstairs in his gunroom and celebrating with family, friends and neighbours.  We will miss the little, mischievous chuckle that he had in his voice.

He spent the last few years at the Montgomery Village in Orangeville making many new friends.   After he reluctantly stopped driving a car he switched to a power scooter.  He could often be found around Orangeville having a quadruple-quadruple coffee at Starbucks, visiting a family of geese at a nearby pond and, of course, smoking a cigar.   The family would like to extend our heartfelt thanks to the wonderful team at Montgomery.  And finally, to the doctors and nurses on E-Wing at Orangeville Hospital your love and care will not be forgotten.

If desired, memorial donations may be made to Headwaters Health Care Foundation.

Offer Condolence for the family of John Thomas Ingoldsby