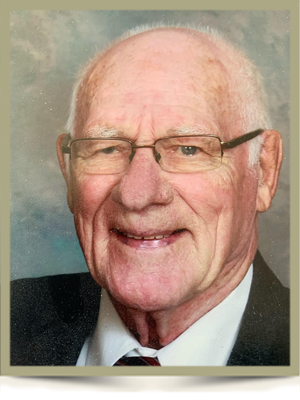 On March 29, 2021, Jack Tarves MacDonald, long time resident of Brampton, passed away in his 92nd year at Woodstock General Hospital.  His best friend and beloved wife of 68 years Edna (nee Wilson) was by his side when he peacefully went to sleep.  Jack was one of the founding members of the Chinguacousy Volunteer Fire Department where he went onto serve as a Fire Fighter for 36 years.  He was a retired employee of 25 years with Canadian Tire and 20 years with the LCBO.  He was a long time and faithful member of Mayfield United Church and Ionic Lodge A.F. & A.M. No. 229, Brampton.  Loving father of Andy and Erin O’Flynn, Wendy and Terry Empey.  Nothing made him happier then to spend time with his grandchildren and great-grandchildren.  Cherished Granddad of Amanda Bruce (Kevin), Hayley Weszner (Kyle), Alannah Gillan (Michael), Bret MacDonald (Ashley Morrison) and Great-Granddad of Madison, Blake, Lucas and Ava.  Dear brother of James (Shirley) (both deceased), Scott (deceased), Joan), Shirley Townsend, and Doug (deceased).  Half-brother of Colin (Marie, deceased) and Ian (deceased).  Jack will be sadly missed by his brothers-in-law, Ken (Judy) and Herb and his sisters-in-law, Joanne and Helen.  He will be remembered by his many nieces and nephews.  A game of cards was sure to break out when Jack was around.  He played regularly with the Snelgrove Seniors, Brampton Fairgrounds Group and the Friends at Rosedale Village and of course with his family and friends.  Jack and Edna travelled extensively and visited 56 countries many of them with Lorne and Joanne Wilson.  He was also known for his home grown tomatoes and homemade raspberry jam.

A private family memorial service will be held at the Egan Funeral Home, 203 Queen Street S. (Hwy. 50), Bolton (905-857-2213) on Saturday morning, April 10 at 11 o’clock.  The family invites those who wish to view the service to do so through live streaming at

If  you experience any issues or have any questions in regards to live streaming, please feel free to contact Forget Me Not Ceremonies at 1-877-895-2739.

If desired, memorial donations may be made to Mayfield United Church or S.H.A.R.E. Agricultural Foundation.

Offer Condolence for the family of Jack Tarves MacDonald

Offer Condolence for the family of Jack Tarves MacDonald