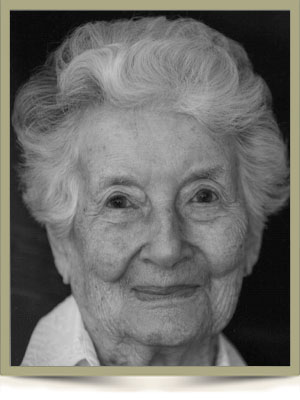 Peacefully, on January 20th, 2022, at the Village of Humber Heights, Etobicoke in her 107th year, after a rich and fulfilling life.

Helen was born in Toronto and grew up in Weston.  She studied household economics at the MacDonald Institute in Guelph and Household Science at U of T and subsequently worked as a dietitian in Depression-struggling Toronto.  In 1939 she married Bob and they raised their family of three boys in Guelph, the UK and Toronto.  In 1968 they moved to Vancouver for 9 years before returning to Toronto in 1977.

She quickly adapted to the challenges and opportunities following their move to the UK and later to Vancouver.  She and Bob shared an interest in classical music, attending summer concerts by the TSO with the family and singing in their church choirs.  They also enjoyed traveling, including trips to Europe, Australia and Japan.  Helen enjoyed sewing and was a very skilled seamstress.  One Christmas she made formal leather gloves for Bob and the boys.

Her faith and family were central throughout her life.  She treasured family gatherings at the summer cottage on Lake Joseph as well as opportunities to host several of her grandchildren in their Toronto home.  Her quiet cheerfulness and grace were hallmarks of her character.

Memorial donations would be gratefully accepted by The Scott Mission in Toronto and Doctors Without Borders.  Helen was a long time supporter of those organizations.

Due to current restricts we must look forward to a memorial service at a future date with her friends and relatives.