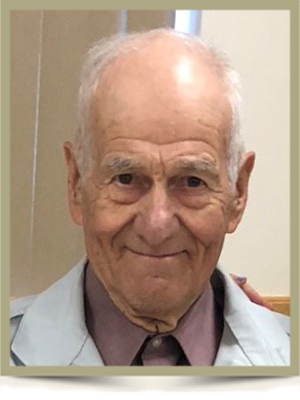 It is with heavy hearts that we announce the passing of our dear father Ernest Vincent LeBlanc – 92, of Lower Wedgeport, Yarmouth County, Nova Scotia. Ernest passed away peacefully on April 7, 2021, at Yarmouth Regional Hospital. Born on May 24, 1928, Ernest was the son of the late Eloi and Monique (Pothier) LeBlanc of Wedgeport. He grew up in Lower Wedgeport and started working as a fisherman in his younger years. He then worked on Don Raymond’s yacht, the Nellie D, as an engineer for 5 to 6 years. Ernest and Iva moved to Ontario where they lived in Toronto, Oak Ridges and finally Caledon where they settled and raised six children for the next 30 yrs.  He worked in the plastic industry for the rest of his working life in Ontario. They returned to their home province of Nova Scotia in retirement. Ernest loved star gazing and astronomy, was a handyman, a wood craftsman, an avid Blue Jays fan, enjoyed playing crib, skating on the pond, as well as many card nights with his siblings and up until his eyes failed him, he loved to read. He never tired of learning something new.  Ernest was a loving and kind father, Grandpere and Great Grandpere and will be greatly missed. He is survived by children Larry (Debbie) LeBlanc (NS), Giselle Holman (ON), Rick LeBlanc (NS), Kathy (Ron) Wiegard (ON), Paula (Bruce) Reardon(ON) and Denise (David Pesce) Rescorl (ON), and a sister Blanche Doucet (NS). Also, grandchildren Kimberley (Nick), Jennifer (Ryan), Mark (Lisa), Megan (Nicholas), Charlotte (Tyler), Brody, Joseph (Diana), Christopher (Amy), Victoria (Spencer) and great grandchildren Emelia, Luke, Mya, Samantha, Madison, Anthony, Nathan and Cameron. Aside from his parents Ernest was predeceased by his wife Iva (Hubbard) LeBlanc and by many siblings. He will also be fondly remembered by many nieces and nephews. The family would like to extend our gratitude to the staff at Yarmouth Regional Hospital on 3 East for their care of our father in his final days.

Arrangements have been entrusted to H.M. Huskilson’s Funeral Home and Crematorium, Yarmouth.

A service will be held at a later date.

In lieu of flowers memorial donations may be made to the Heart and Stroke Foundation or St. Michael’s Cemetery Fund.

You may leave messages of condolence for the family by visiting www.huskilson.net

Offer Condolence for the family of Ernest Vincent LeBlanc