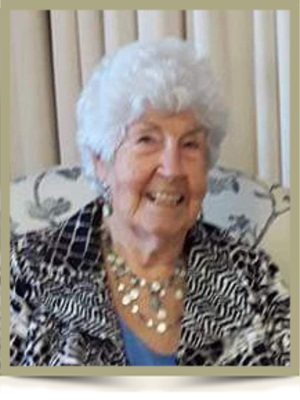 Suddenly at home in Orangeville on Friday, October 25, 2019 Blanche Piercey, in her 90th year, beloved wife of the late Clarence Edgar Cook, Sandhill.  Dear mother of Catherine and the late Broderick Crawford, Glenn and Ruthann Cook.  Cherished grandmother of Michelle, Kevin, and Sara.  Dear sister of Carman and Olive Piercey and predeceased by Newton and Leona Piercey, Phyllis and Ken McMullan.  Fondly remembered by her nieces and nephews.

Funeral service will be held in the chapel on Wednesday morning, October 30 at 11 o’clock.

Following a reception at the funeral home interment will take place in Providence Cemetery.

Eastern Star service will be held on Tuesday evening at 7 o’clock.

If desired, memorial donations may be made to the charity of your choice.